“Even if it was only one woman, we’re really proud of that. Honestly, we weren’t expecting anyone to win,” said Sahar Hassan Nasief, a women’s rights activist in the Red Sea city of Jeddah.

But with 2,106 seats up for election, the nine women would comprise less than one percent of Saudi Arabia’s elected council membership.

“We need more than nine,” said Aljazi al-Hossaini, who was defeated in Diriyah on the edge of Riyadh, where three women won seats, according to Saudi news channel Al-Ekhbaria.
She hoped women would be included among the one third of council seats which are appointed by the municipal affairs ministry.
In the first announcement of a woman winner, Salma bint Hizab al-Oteibi was elected in the holy city of Mecca, the official SPA news agency reported.

In the kingdom’s east, Sanna Abdel Latif Hamam and Maasooma Abdel Mohsen al-Rida were elected in Ihsa province, it added.

The duties of municipal councils are limited to local affairs including responsibility for streets, public gardens and garbage collection.

Saudi Arabia is an absolute monarchy with some of the world’s tightest restrictions on women, including a ban on driving.

It was the last country to allow only men to vote, and polling stations were segregated during the ballot.

They had to overcome a number of obstacles to participate in the landmark poll.

Female candidates could not meet face-to-face with male voters during campaigning, while neither men nor women could publish their pictures.

Women voters said registration was hindered by factors including bureaucratic obstacles and a lack of transportation.

As a result, women accounted for less than 10 percent of registered voters.

According to election commission data, nearly 1.5 million people aged 18 and above signed up for the polls.

This included about 119,000 women, out of a total native Saudi population of almost 21 million.

At least two parts of the country reported a female turnout of around 80 per cent, according to official data.

In the mountainous Baha region, female turnout was around 82 per cent while about half the registered male voters cast ballots, data showed.

Female candidates expressed pride in running, even if they didn’t think they would win, while women voters said they were happy at finally being able to do something they had only seen on television or in movies.

Nassima al-Sadah, an activist in the eastern city of Qatif, said the voting process itself took place relatively smoothly, unlike the registration.

Many female candidates used social media to campaign, but a handful of others, including women’s rights activists, were disqualified from the process.

Ruled by the Al-Saud family of King Salman, Saudi Arabia has no elected legislature and faces intense Western scrutiny of its rights record.

A slow expansion of women’s rights began under Salman’s predecessor Abdullah who announced four years ago that women would take part in the 2015 municipal elections.

Men have voted since 2005 in the local polls. 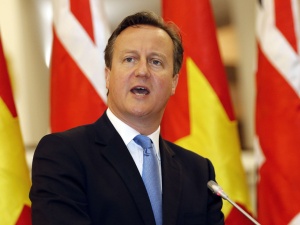 I for one is very applaud by the Insults of the Jamaican people by David Cameron the British Prime Minister who recently visit the Island and the only concession that he could make to the Jamaicans is to spend £25 Millions Pound on building Prison.
My question to Mr Cameron is what about Trading with their old footstool so that they can have a better life, what about offer to build more school for the young deprived.
Is Cameron a prawn where the shit stuck in it’s head, less he forget most of Jamaica problems was caused by the British Colonial rule of which that Island is still suffering from both mentally and physically.
Has he forgotten that after the last World War it was the people from that said country who was taken to rebuilt his country that he believes that he was the only one that was born to Govern.
Is it that Cameron sees every Jamaican as a criminal why his only offer is prison, what about those who were born in Britten, are they going to be sent to Jamaica too,think again Cameron the people won’t be taking this likely, it’s time you hands up and help the people your forefather has left in poverty.

The Jamaica Labour Party (JLP) has accused Dr Fenton Ferguson of poor representation, saying that that was among the reasons for the high rate of poverty in the St Thomas Eastern constituency.

Delano Seiveright, the JLP candidate/caretaker for the constituency, said that the conditions experienced on a ‘Poverty to Prosperity’ tour of the constituency with Opposition Leader Andrew Holness last week showed up a number of examples why St Thomas has become the poorest parish in Jamaica, as outlined in Planning Institute of Jamaica data.

“Collapsed roads, bridges and water systems, along with governmental neglect, widespread unemployment and high rates of poverty were among the long list of issues which were brought to the attention of the JLP leader as we toured sections of the constituency on Thursday and Friday,” Seiveright said in a statement.

He said that the Government and Dr Ferguson, the member of parliament for the constituency, “have failed the parish miserably”. He noted that poverty has more than doubled, from roughly 14 per cent in 2008 to 32.5 per cent or more today, according to the Jamaica Survey of Living Conditions (JSLC).

The JSLC report said that at 32.5 per cent St Thomas replaced St Mary as the poorest parish in 2012.

“To put things into perspective, it is the only parish without a stoplight, has the lowest value in real estate transactions, doesn’t have a parish clock, and is ridden by problems with basic infrastructure at every turn,” Seiveright said.

“There is hardly any worthwhile economic activity, so many young people are depressed and most are desperate to find a way out. Representation, frankly, for St Thomas Eastern cannot get any worse. Despite tremendous potential for development, it has been left to suffer,” he added, noting that the over 500 redundancies at Golden Grove sugar factory, announced recently, would not help the situation.

Seiveright said, however, that it is clear that the people are “keen on fresh ideas, fresh faces, and fresh leadership. They want a change”.

He said that over the two days of the tour, he and Holness shared aspects of a development plan framework for the constituency, which the JLP has been developing.

The tour began at the St Thomas Infirmary in Morant Bay on Thursday, where Holness, Seiveright and other officials met with staff and residents. They also met with representatives of the police and fire brigade, several members of the business sector, market vendors, and residents.

The tour was described by JLP General Secretary Dr Horace Chang as “highly successful and (had a) really unbelievable turnout”.

He said that this signalled that “the seat is now ready to return to its JLP roots”.

My first question to these European Judges,is have you ever had any of your family member Life been taken by some unjustifiable two legged beast.
I guess not, as they would have think twice before making such drastic decision by saying that by it is cruel and degrading and would breach their human rights.
Shouldn’t these Murderous,cold hearted scum’s think about this before they carried out their acts.
Well if this view of a few do gooders is about to change the Law of the land, then it’s only going to be one simple solution,which is once you have taken a life,then your life should be taken also.
Who suffer’s the penalty of these murders,Not the murders but the Families and Friends of each victims.
They need to think twice on this one before it’s too late,God Bless.

An Iranian bank will be removed from the UK Treasury’s sanctions list following a ruling from the UK’s highest court where judges have been critical of the government’s decision to include secret material in the case.
Bank Mellat had asked the Supreme Court to overturn a ruling that bars UK financial institutions from engaging with the bank as part of efforts to press Iran into abandoning its nuclear programme.

I am beginning to wonder how many more of our young men and women is going to sacrifice their lives in a war that they have been drafts into that they know little or nothing about.
The toll is there show that they have little or no preparation for such war that our western Governments has engage young men and women into, each day almost begins with another Soldier has been killed in Afghanistan.
There is this question why is it that whenever there’s an up rising in countries for the like of Iraq,Afghanistan,Syria and such a like we are so quick to declared war,is it to protect the Rich Resource of these countries that the lives of these Soldiers has to be sacrifice, or is it that the Big men of the western world wanted to exercise their muscles to claim a prize.
It is time that bad situations been made to be resolved without making it worse than they bargain for, it’s time to get the hell out of Afghanistan and let them fight their own battle and save the lives of our young troops.